I have been working with or attempting to work with a client for quite some time. It has not been going as well as I would like it to.

First of all, he wants to reach his personal potential in climbing, but has been prevented from doing that by one injury after another. As we were finally ready to begin a training program, I get yet another email that indicates that another setback has occurred. In his latest email to me, he says that he will come back after another break better than ever and ready to take on a program.

Now, I know how long we have been trying to work together and how frustrated I would be if I was in his shoes, yet he still comes back with positive energy and a great attitude after each set back. In a later email, he said that he wished that he would stop stringing me along and finally be able to begin his training.

This is what I told my client, your situation has allowed me to reflect upon my own and realize how lucky I have been over the last 20 years. I have been essentially injury free (the broken back being the exception) the whole time. Trying to come back over and over after injury after injury would drive me nuts! I am impressed and inspired by your drive and willingness to not give up.

He responded that he was psyched to be able to inspire me. For your information, anyone who is trying hard at something that they are passionate about be it writing, running or anything is inspiring to me. Especially when things are not going as they wish. It takes a truly special person to hang in there after obstacles prevent them from reaching their goal. So don’t give up and get out and have an adventure!

I was fortunate to have two mini climbing trips squeezed into my brief summer holiday. My school year in Grand Junction just keeps getting shorter and shorter every year. Soon I bet we will be working year round which will change things up a bit I am sure. But anyway I first headed to the New River Gorge to play on the rocks that I began climbing on over 20 years ago. Needless to say, I was very excited.

My climbing and training partner and one of my best friends Ben joined me for the trip. One week and the goal was to just climb 3-5 star routes first go. That means we wanted to onsight as many different routes that we could each day. It was extremely challenging to do that because neither of us had been climbing too much at that time and we certainly didn’t know the ebb and flow of the sandstone features of the New. Many of the routes that we chose were established by the two most prolific first ascensionists of the New River Gorge. Doug Reed and Porter Jared. I remember reading their names in the guidebook when I was just learning to climb and wondered what it would be like to establish a new rock climb. Now over twenty years later I had the chance to try many of their test pieces and truly enjoy their hard work!

We arrived in the rain and I was not even phased. I new there was overhung terrain with classic routes to try so we immediately went there the day that we stepped off the plane in Charleston, WV. As the rain poured down, we climbed pitch after pitch and enjoyed finding a painted turtle at the base of the wall. We also heard one of the loudest thunder from the storm overhead. The rest of the week was filled with a chance of rain on partly cloudy days. High heat and high psyched destroyed my fingertips so I had to do my best to try classic climbs that didn’t have tiny grips. Ben and I had a great time overcoming the sun, rain, finger pain (from worn out skin) and the complex sequences of the New River Gorge.

Coming back to hang with the locals after each day on the rocks was always fun and even depressing at times. Its always fun getting to know new people but hearing about all the other amazing routes that we should try in the Gorge just make me sick to my stomach. I just wanted to try them all and eventually send them and the fact that I was there in the middle of summer for just 7 days made me bummed out. Needless to say when I woke up each next morning, I knew that it was my chance to tick some a few more of the classics off the enormous list. Anyway, the list is still long and I learned a lot about onsighting when I was tired. 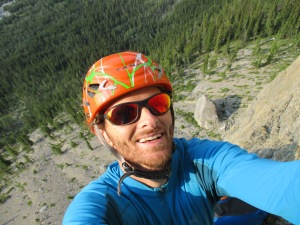 This photo isn’t from the trip cause I can’t to locate them. I think that when I had to return my laptop, I lost the trip photos. Bummed.

I just wanted to say thank you to anyone who has or continues to visit my blog.

I am not the most fluent with my writing and I just try to share photos and moments that my family and I have had recently.

It’s fun to look back to see what we have been up to and I look forward to seeing what adventures lie ahead.

Come and enjoy a presentation about desert first free ascents in Colorado and Utah!

Bigwall, single pitch and river trips will be featured.

You will enjoy yourself and probably get some free prizes.

Bring your trvia game face cause it will be another way for you to win gear from my sponosors!!!

I will be presenting a desert climbing slide show at the Colorado Mesa Univeristy.

It is part of their Wednesday Night Wandering Series.

Come and join be for a fun night and maybe even get some gear!

Check the school website for the time and location.

My presentation is still to be determined but it will be a great night none the less.

Come and join in the fun.

Get outside and have an adventure.

If you are interested in having me speak at your event. Contact me and we can work something out! 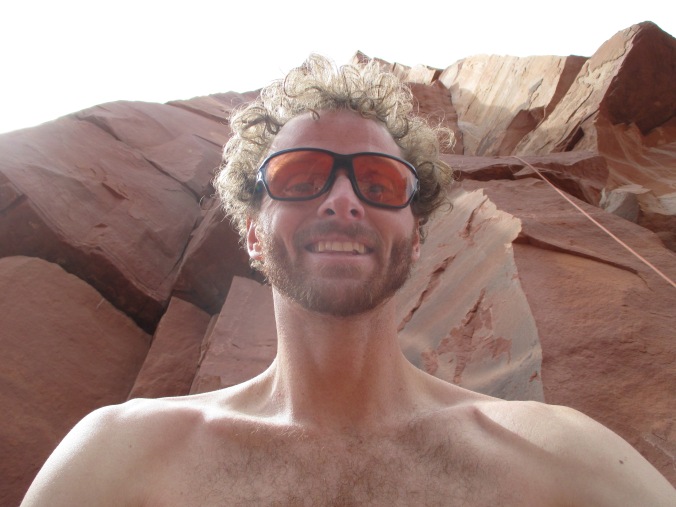 I recently completed an 8 week training cycle of Treadwalling, Fingerboarding and Circuit training and I was looking for a short-term goal to determine my fitness level. I choose a route that included an hour hike, higher temperatures and a very techy style. I wanted to see how my crimp training on the treadwall and fingerboard had paid off. It turned out that I was unable to replicate the tiny crimps on the route. This meant that I had the ability to hang on and use them effectively, but that I did not have the skin to try to use them too many times. This was a problem as I gave myself 1-2 days to complete the route.

My first burn took quite a while after I fell at the low crux while attempting to onsight the route. After that I slowly and methodically worked out each sequence finding the most efficient manner to move up the wall to the anchor. After a rest and my partners burn on the route, I gave it a top rope burn to solidify my efforts. I was excited to see that it had paid off and I fell just two moves from the finish of the route. The problem was my skin. I was through the layers and knew that with one more attempt on the route that I would be bleeding through. Even though I still gave it one more try shortly after and realized that I was more fatigued than I expected.

The next day (one week later) I was pleased with my efforts. The route came together and I was able to onsight the rest of the pitches of the climb. I did fall on my first attempt of the day due to not getting warmed up properly after the pitch but that is ok.

What does all this mean and how does it relate to goal setting? Well, due to a busy schedule and having to plan out climbing days months in advance, I have created a hit list of short and challenging but attainable goals for me to work towards over the next few months. Any of the climbs are doable over a long period of time, but that is a luxury that I do not have nor do I want to spend weeks and months on one single route. I have added the deadline of time to my projects and new routes. This is a bit more fun and will help train me to climbing harder climbs more quickly.

What I have learned through my training is that any route is achievable over time. For me, spending years on a climb to complete it is noble yet a waste. At some point you know that you physically fit enough and it’s just a matter of time and at that point why not move on? Also, in all that time that you have spent, think about the long list of other climbs that you could have accomplished. It is a double-edged sword that I feel it only worthy on a first ascent.

Anyway, choose goals that meet your schedule half way. Make sure that you love the route that you choose because you may be spending a lot of time on it, thinking about it and training for it. Choose routes that are assessable for you and your partners and that are not temperature dependant. finally, choose lines that are important to you and only you. If you are climbing it for anyone else, your heart won’t be in it and it will feel like a job more than your passion.

Get outside and have an adventure!

I have two great shows coming up.

The next on is on May 6th

If you are a doctor and want to join in the fun, come on down for the dinner. I promise that I will add some flavor to your dinner!

Check the Link out for information about my upcoming slide show!

It is about new routing on Tehipite Dome in Kings Canyon National Park, California.
Hope to see you there!!! 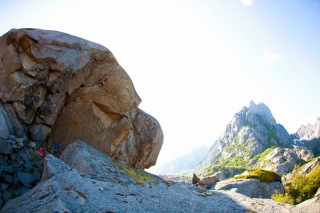 Come join me and learn about the rock climbing in Lofoton, Norway.
24 hours of daylight, open access to all climbing and incredible scenery are just a few flights away!
I will share insights about his travels and why Lofoton is a hidden gem that should not be missed.
Sponsored by CAMP, Arcteryx, Sterling, and SCARPA

I like to take photos of the planes for my son. This one is in Denver International in concourse B. 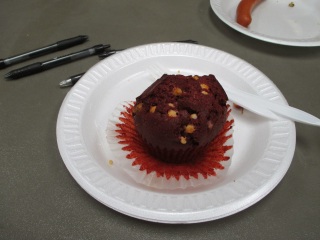 Who doesn’t want cupcakes while on the road? mmm red velvet 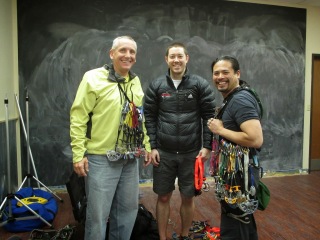 A few of the clinic takers getting ready for a big trip to Queen Creek! Have fun fellas!

Bathroom decor at the gym!

Lots of peeps getting ready for my two slide shows on Sat night!! We had a pot luck too and it was great to meet and talk with everyone.

We were reminded how our efforts with the Access Fund and our local climbing areas help keep them open. Don’t be afraid or think it is a waste to join up and participate in events like trail building or meetings with land owners or land regulators! It all helps and areas only stay open because of dedicated people like you!